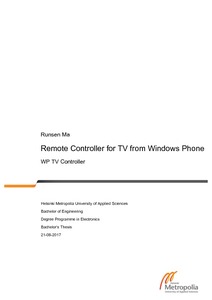 The objective of this study was to design a windows phone remote controller for a TV with microcontrollers,a touch screen keyboard for the WP that sends commands to the microcontrollers.

In this study, codes for Windows Phone 8.1 Bluetooth controlling NETMF Gadgeteer were made, to run in the visual studio environment. Modificantions were made to create the buttons for the TV controller. Signals were sent to spiders through bluetooth to control the source materials from GHI Electronics. The microcontrollers are programmed to a .NET Micro Frame work (MFW) with C#.

The goal of was basically achieved despite some errors running in visual studio. Commands can be sent to controll LEDs successfully although there were some irregular colors on the display of LEDs.