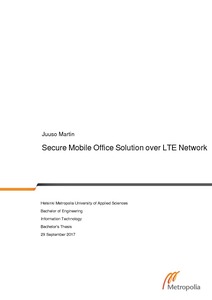 The goal of this project was to create a proof of concept of a working, secure and agile mobile office solution by using SRX 320 with LTE mini-PIM and L3 VPN over LTE. In addition, another goal was to improve the author’s knowledge of MPLS and VPN technology.

A configuration for the solution was built from the start because no previous versions existed. A test environment was created to mimic possible usage of the concept. The test environment consisted of a laptop behind SRX 320 with LTE mini-PIM as mobile office and SRX 1500 was deployed at the lab with a Linux server behind to act as a corporate server.

It can be safely stated that all the goals were met and the testing results show great promise for the solution to be implemented in the future.