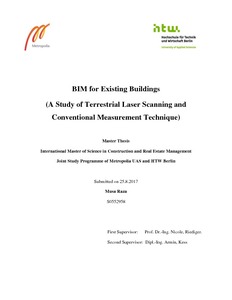 Creating a BIM model of an existing architectural structure such as a building can be a time consuming and difficult undertaking. Issues such as precision, line of sight, time, and financial constraints can pose problems when creating such a model. Such issues can be dealt with terrestrial laser scanning. The traditional approach being practiced cannot be considered efficient enough in the modern era of technology and tools due to longer exposure. There is no definite framework and standardized routes to be followed. The opted or selected framework would contribute to the precision and feasibility of its use for a certain project.
Conventional measurement techniques allow us to obtain the required information for the existing buildings but the use of technology is lacking in terms of its integration with the current design framework in the Architecture, Engineering and Construction industry (AEC), namely Building Information Modelling (BIM), as well as its limited application for renovation projects. The biggest demerit of using conventional methods for measurements and BIM model creation is a huge human effort associated with data collection, processing, storage and recording as the human beings are prone to safety hazards while measuring.
A rational approach was used to address this concern by producing frameworks for traditional and TLS technology which would fit its use for the AEC users. The chosen methodology to perform this comparative study is based on the Case study and literature review. A case study was introduced to investigate the financial, time and practicality attached with both the TLS and conventional measurement technique for creating BIM model. Two different cases were used to make comparison for the TLS cost and time consumption to validate the results.
The results show that there is 35% of increased budget required for the production of BIM model of an existing facility where the architectural components of the building were considered. The higher cost as compared to traditional measurement approach can be understood well knowing the capital costs involved for the interested industrial users. The case study comparative results showed that the time consumption for human exposure on to the project site is reduced to half using TLS for existing buildings BIM model as compared to traditional measurement tool. The cost for the BIM model was connected with the area of the building. Bigger area for BIM modelling resulted in lower costs using TLS.
This piece of research contributes to the knowledge of TLS by presenting a real-time example of how BIM and TLS be integrated for the existing buildings for any required purpose. This provides a development idea and model for the future users and researchers to undertake the process improvement by using this example as a practical guide for understanding the feasibility of TLS and BIM for different existing buildings.