How the technologies of tomorrow will transform the workforce : How to curtail the negative effects of the transformation and to reinforce the positive ones? 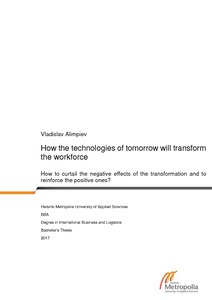 In this thesis, I would like to try to answer this question:
How will the technologies of tomorrow transform the workforce and the nature of work people are doing and how to curtail the negative effects of such a transformation and reinforce the positive ones?

This question is especially important these days, when technologies are acquiring skills that historically only humans possessed and the economies of many countries of the Western World are still recovering from the Great Recession. Major scholars agree that unless something is done, the welfare state system, deeply enrooted in the Western society, eventually is going to collapse (Greve, 2013). To sustain it, taxes either need to be raised, the entitlements cut, or some combination of both. Alternatively, the very definitions of labor, entitlements and taxes in general could come under scrutiny and the leaders of tomorrow will have to make hard and unpopular choices in order to prevent economies of the Western world from collapsing.