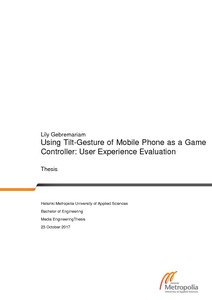 The purpose of this final year project was to execute an experiment on using tilt-gesture of mobile phone as a game controller on large screen in a public setting. Overall user experience regarding interaction technique includes the following: intuitiveness, social acceptance and feasibility were examined from the experiment.

To implement the experiment a collaborative real-time “ping pong” prototype game application was developed and used as a case study. The game uses tilt-gesture of mobile phone as a remote controller to let a pair of players play the game on a big screen.

Two experiments were conducted with Metropolia and Laurea Universities of Applied Sciences (UAS) students. Qualitative research methods such as interviews, survey questionnaire and observation were implemented to evaluate the user experiences. The data recorded from the experiment was used to analyses the user experience on three levels; “experience”, “an experience” and “co- experience.

The results showed that turning large LED screens in public use into interactive game applications enables users to play a collaborative game without buying a game console. This was experienced as fun and intuitive. The results also emphasized that understanding the experience and social behavior of users in a public setting is a crucial aspect in designing gesture based- interactive applications.

Feedback from the users helped to identify the improvement issues in the game as well as important features of the game UI. Advantages and drawbacks of the game implementation technique were collected, which could be used for future study.