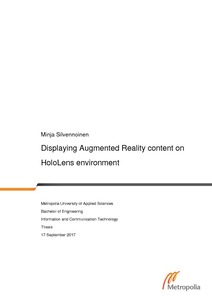 The first part of thesis concentrates on general research about augmented reality and HoloLens technologies. Next the content creation process for HoloLens is described and best practices for augmented reality applications are considered. Last part concentrates on the actual converting process from Arilyn mobile application to Arilyn for HoloLens.

Arilyn for HoloLens includes almost all the predefined features. It supports image, video and sound files. The only datatype that is missing is 3D models. HoloLens uses different texture compression than smartphones, so the support for this type needs to be added to Arilyn Manager.

During the conversion process, it was noted that target-based augmented reality is not the most suitable for HoloLens device. HoloLens renders dark colors transparent which sometimes leads to a situation where the content seems it is positioned behind the target. Another problem was how the user’s eye focuses on the content. The content is rendered close to the eye which leads to seeing the content as a double.

Even though target-based augmented reality has its problems, it is important to keep researching the subject. The problems might be easily solved after the overall quality of head-mounted devices gets better or after the subject is studied more.