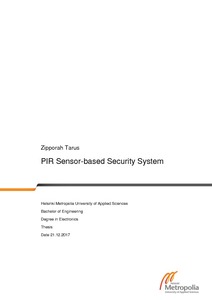 This thesis deals with the design and implementation of a PIR sensor-based home security system which uses Raspberry pi and PIR sensor. The project is designed to assure home security through surveillance.

The project is based on PIR sensor connected to an integrated circuit for the generation of an alarm. HDMI transmits pictures and videos to a displaying screen which saves this information and sends an alert to a specified mail recipient. Raspberry pi is responsible for the operation and control of motion. Detectors and video cameras, on the other hand, sense movement and give surveillance and stream live video or record occurrences for later playback. The sensor perceives Infrared Radiations (IR) emitted from humans within their field of view then provides a digital output. The output is applied to the UM3561 IC generating sound upon detection of human intrusion.

The design also will provide the number of persons located, with the help of a Passive Infrared sensor. When PIR Sensor detects motion, the camera automatically initiates recording and Raspberry pi device alerts the owner of a possible intrusion having a display on the screen and sending an email alert to a specified email address. The circuitry is inexpensive, and its electronic security system is highly secure