Is There a Future for the Euro? : Evaluating the paths in saving the euro project 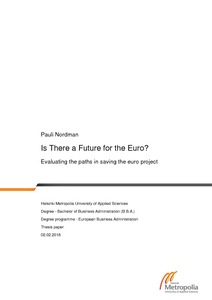 This thesis paper examines the possible future paths and challenges of the euro. The European monetary union is currently at a phase where it is trying to find direction and looking to become a more robust union. My thesis paper addresses the current problems of the monetary union, such as the strict monetary policy, lack of security measures to provide stability in case of an economic crisis and additionally the risk of divergence in the political spectrum. The problems are contemporary issues, and many of the possible future fixes are still on the negotiation table. My research is based on theoretical foundations and it has been done using secondary sources. My sources include books, research papers and newspaper articles. The main results of the research paper illustrate that for the euro to become a sustainable currency and for the monetary union to survive, several improvements have to be made in order to enhance the structures of the monetary union. These improvements include a full-scale banking union, fiscal union, and a capital markets union. Furthermore, my research implicates that the European central bank should take a more liberal stance on monetary policy, and not be fixated to the 2% inflation rate. Additionally, more political convergence is required to fulfil the legitimacy of the mandate of the monetary union. The political convergence is especially important in times of crisis.