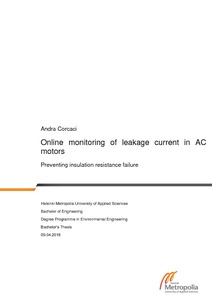 The aims of this thesis were to present the methodology behind using leakage current to determine the condition of an electric motor, including the separation of resistive and capacitive leakage current. The study also includes an explanation of the Talas Leaker device from Talas Electric Oy. As the commissioner of this project, Talas Electric Oy’s targets for this thesis were to have five working prototypes of the Talas Leaker and technical documentation prepared.

The results of the study and subsequent experiments show the intrinsic properties of an electric motor’s components (an increase in frequency with a constant voltage decreases leakage current, an increase in voltage with a constant frequency causes increases leakage current, absorption current effect of insulation resistance, the inversely proportional relationship between insulation resistance and capacitance of the windings and the proportional relationship between contamination of the windings and capacitance of the motor).

The importance of such a device is vast and multidisciplinary; it can help prolong the life of electric motors and other electric equipment as well as prevent severe injury. Further study may be carried out to allow the Talas Leaker to separate between resistive and capacitive leakage, to measure two electric motors at once and to bypass the circuit board altogether.