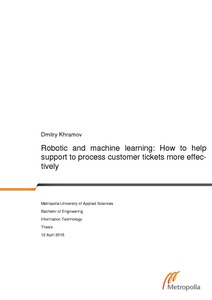 The objective of the thesis work was to explore opportunities provided by emerging digital technologies, such as robotic process automation and machine learning and apply these technologies for enhancing the efficiency of company’s business process. Developed automation was embedded into existing process of handling incoming customer issue tickets. It allowed a significant increase in the tickets’ processing speed and will relieve human workforce from repetitive, low value-added tasks.

Process automation was combined with machine learning in order to introduce decision making capabilities for the robotics workflow. Historical data from issue tickets was used to train supervised machine learning algorithm for prediction, based on textual content. This method indicated whether a ticket belongs to the particular group. Several classification algorithms were evaluated by accuracy performance with different representations of textual data. Superior performance results were achieved by using linear support vector machines and logistic regression which were trained on the data. Finally, the results were transformed into binary vector representation with n-gram range from 1 to 3.

Implemented automation identifies correct support group with 75% accuracy and 76% precision, which allowed taking under RPA coverage 16% of English subset of processed tickets. At the time of writing this study, the automation was evaluated in test environment and considered for further extensions and accuracy improvements.