Development of a Web Application for Management of Public Events 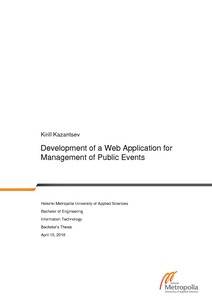 This thesis was carried out to study the topic of Full Stack JavaScript development and based on the research to implement a web application for management of public events using the studies technologies.

A thorough analysis of the topic was conducted. Such technologies, as Node.js, MongoDB and Express were examined in great detail. Their advantages and disadvantages were identified and compared to other technologies that are used in web development. After a prolonged research, a working web application prototype for management of dance tournaments was developed. The prototype consists of the creation of tailored tournaments using an appealing user-friendly interface, a possibility to easily sign up for tournaments and make payments and, finally, a management of all tournaments and registered participants

The application was built based on the studied technologies as well as a custom framework that was created on top of standard “express” router to have a better control and flexibility. The project suggested a way of organizing the directories and designing the architecture.