Automating the Creation and Deployment of New Robot Framework Libraries 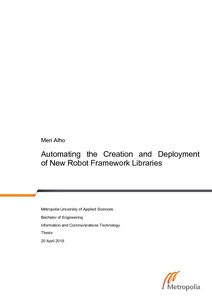 The primary objective of this thesis project was to study options for carrying out the improvement of the Robot Framework library creation process, and to finally develop an implementation for an automated system. The goal of the automated system was to create a new Robot Framework library into the version control system and to generate all needed Jenkins jobs for the new library with minimal user input and effort.

The project automation was based on Jenkins, which is an open source automation server software. The project was divided into smaller sections, which were then divided into subtasks. The two main sections of this project were: creating a template for new libraries with the Cookiecutter tool, and setting up a Jenkins Pipeline to serve as the basis for the automation system. Cookiecutter is a software project templating tool. Testing of the solutions was conducted at all development stages using both unit tests and manual testing.

The system created as the result of this thesis project succeeded well in filling the requirements set for the test automation framework improvement. The system is designed to be easily modifiable, reusable and extendable for future use.