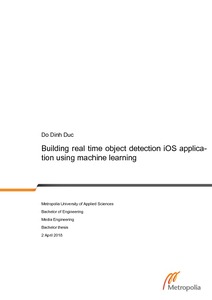 The goal of this project was to introduce and develop complete neural network models, then use them as part of a real time object detection application which supports multiple models’ integrations.
The basic neural network architectures were presented to demonstrate the hypothesis of how neurones are connected to each other. One simple ex-ample of neural network usage was included in order to show the algorithm’s ability to learn by itself. Some examples of how neural network has affected your daily life will show how far this technique has come and changed human life.
Machine learning has played an important role in modern software application, and in most cases, neural network is the heart of the algorithms. Along with it, hardware innovation and the rise of cloud computing technology are helping developers to write, run, and deploy neural network algorithms much faster with reasonable costs. As a result, real time object detection has become usable on our personal devices with great potential.
This project describes how to build an image classification neural network and trained models out of it with different existing architectures using Turi Create, then integrate them into an iOS application with CoreML and Vision.