Deploying and Testing IKEv2, Flex VPN and GET VPN 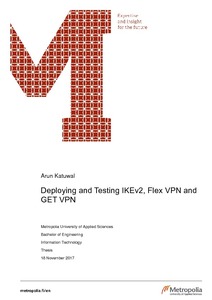 The goal of this thesis was to study the detailed configuration and deployment methods of IKEv2, FlexVPN and GET VPN so that any reader can test it in a real environment and evaluate and analyze the comparison between these technologies. This thesis is aimed not only to study the configuration methods but also to deploy FlexVPN using IKEv2 in a real environment at the laboratory for the testing.

Initially, the first phase of this project was to study the detailed configuration and deployment methods of IKEv2. As IKEv2 is the building blocks for Flex VPN, detail information was necessary. To complete this project, a network topology was designed and was implemented in the school laboratory. During this project, Cisco routers were used, and Windows desktop computers were used as the end devices. During the laboratory work site to site Flex VPN configuration were established to get the results. The command line interface was used as a tool to configure and the network connection was successfully established. The established connection was secured from end to end.

Due to some limitations, the network that was designed reflects a very small size organization network. But the methods of implementation are applicable to a network of any size. After implementing everything, the network was tested, and it performed as designed, the tunnel which was implemented between the routers were also successful.