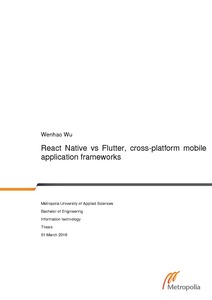 Developing mobile applications for Android and iOS separately has become a burden. A general solution that considers developing, maintaining, testing and deploying for different platform is an important topic. This kind of solution should be able to unify the process of mobile application development.

React Native, developed by Facebook, has been regarded as a milestone in cross-platform SDK. A strong and active community has made React Native the most popular cross-platform framework. However, after considering the pros and cons of React Native, Google has released Flutter as their approach to unite developments. Flutter is highly optimized to adapt mobile environment and aims at providing the final solution to developers.