The Development of Macroeconomic Imbalances in the Eurozone : A comparative analysis between the North and the South 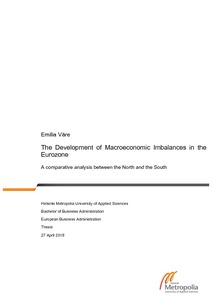 Economic convergence has been an on-going issue throughout the process of European economic integration. European institutions have constantly stressed its importance as an essential prerequisite to secure sustained long-term growth and social coherence for the whole Union. This has been challenged by the on-going sovereign debt crisis and differential macroeconomic performance across the Eurozone, calling into question these predictions. This has even prompted arguments that the adoption of a common currency may have functioned as a catalyst for divergence and, specifically, a source of the increasing divide between the core and the periphery. The aim of this paper is to provide theoretical outlook, with supporting evidence, on the development of current core-periphery imbalances in accordance with Optimum Currency Area and World Systems theories. According to various arguments, the divergence was caused by either the introduction of the European Monetary Union or the irresponsibility of the PIIGS nations. These two opposing claims were formed into hypotheses and tested. After analysing several macroeconomic performance indicators, including GDP per capita and real effective exchange rates, the results showed minimal influence from the EMUs perspective. Nonetheless, it also seems that the PIIGS were not entirely at fault given the circumstances.