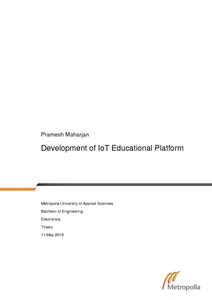 The main goal of the project was to design and implement a sensor platform by designing and building the PCB board and interfacing Particle Photon device with sensors and the XBee.

At first, the prototype board was developed, then sensors were embedded, followed by programming the board that supports all the connected sensors. The functional test of board was verified. As the board worked properly, then the platform could be used for testing varieties of other sensors and its further development. The platform was also suited for including ZigBee to support Personal Area Network (PAN). The platform was based on ARM based CPU board with integrated IoT connectivity.

Sometimes, we find very frustrating when a lot of jumper wires and sensors are required in a breadboard for various projects. The platform board could be used to get rid of bread-board and jumper wires for various sensor projects. The board consists of analog, digital and I2C ports for connecting the sensor modules conveniently. The platform replaces the frustrating problem of large number of chaotic jumper wires. The board uses Particle Photon as a CPU where all the sensors are interfaced. The particle Photon is connected to the cloud and helps to get access for the projects that we are working, from anywhere. The XBee will be used as a RF module for the platform enabling the device or sensors for wireless communications.

The aim of the project was achieved. However, some issues were discovered while soldering the PCB board and hence, it was directed for testing the prototype design on a bread-board.