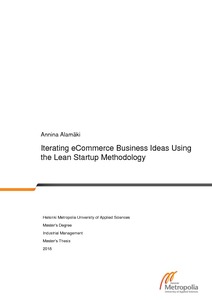 The study first analyses the two business ideas, and customer value propositions are built for them. Then based on these customer value propositions, the minimum viable products for the business ideas were built and tested using Google Adwords. The results and conclusions of this study are based on the quantitative data collected from the Google Adwords test, and based on the qualitative information collected from the customer interviews.

The study indicated that out of the two initiative business ideas, called Ruusu and Origami, the one that should be accelerated further is Origami. The numeric results from the Google Adwords test were better for Origami. In customer interviews, uncertainties about both business ideas were discovered, but the conclusion was that the uncertainties about Origami could be worked on and, by optimizing the business idea further, it has more potential to develop than Ruusu.

This finding is significant as this provides the opportunity and confidence to start further optimization of the Origami business idea and offers a possibility for founding my own eCommerce company based on the selected idea.