The Transatlantic Trade and Investment Partnership : A critical approach 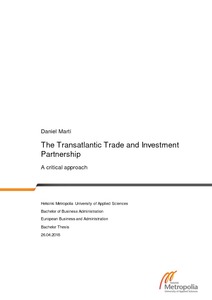 With the arrival of globalization, free trade is being presented as the path to economic growth and job creation. However, many times, free trade deals have not lived up to their expectations.

The Transatlantic Trade and Investment Partnership (TTIP), a deal between the European Union and the United States, aims at reducing barriers to trade between these two economies by implementing certain measures, some of them widely criticised by the public.

Much has been said about the TTIP since its conception in 2013, not much has been done. I am analysing this treaty due to the scope and potential impact it would have on the world’s economy, as it is an attempt to merge the two biggest markets and although negotiations currently are on hold, if this agreement sees the light, it would drastically change international trade as we know it.

My intention is to first explain what is trade and how is it carried out, to then break down the TTIP, explaining what are the arguments that support it, why is it criticised and which might be the intentions behind it.

In doing this, I attempt to reach an objective conclusion and present to the reader what could be expected as an outcome to a deal of such dimensions.