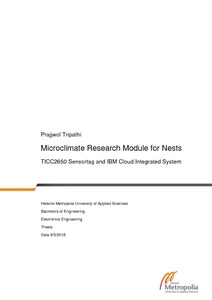 Goal of this project was to study Texas Instrument’s CC2650 Sensor Tag Module and Cloud Computing environment of IBM Cloud. A detailed study of these two subjects was done, as well as a Cloud Sensor product was designed.

Motive behind this thesis was to study about the possibilities of using SensorTag module to study birds nesting behaviour by collecting various sensor data and extracting those data through cloud. Need for implementing Texas Instruments product was realised, as few of the earlier prototypes that were designed by other fellow students, were not ideal for the existing situation. Previously a similar Arduino Senor Bundle was created to understand bird’s nesting behaviour, but its physical complexities and lack of user friendliness prevented it from being used in a real nesting situation. So, a fast easy and user-friendly system was on constant search when we were introduced to a SensorTag Module designed by Texas Instruments.

By integrating SensorTag with IBM Cloud, a cloud server environment was created, where incoming data from sensor’s were stored in an IBM Cloud database, which can later be extracted to physical database, according to the need. This thesis can also be used as a basic guideline for students and professionals who are new or unfamiliar to electronics world and embedded systems. These could be students who want to play with sensors and create a weather station of their own or professionals who need a real-time data sets to work on their Big Data Research’s.