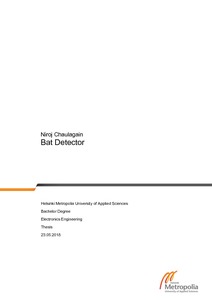 Bats are found all around the world and study of bats is important as they are the part of the ecosystem we live in. For research and study, bats are to be located and for that, bat detectors are needed.

The main target of this study was to build a prototype that would detect bat calls. This study aims to help scientists and researchers to study further about bats with the help of economical device for their detection.

The result showed that the ultrasonic sound could be detected using the components that are not so expensive which would help in saving money in research and study. The transmitter circuit worked in the beginning but showed some problems later on and the components were changed. However, the main focus was on building a detector which was a success.