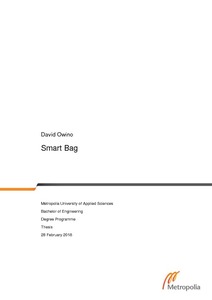 This project has been motivated by a desire to solve the problem caused by dishonest luggage handlers who occasionally open travellers’ bags while these bags are on transit. Such acts have been filmed through hidden cameras around airports and reported on various internet platforms with one such case having been posted on Facebook in October 2017. Passengers being unable to notice the loss of their items until they arrive at their homes means that very little of such items can be recovered. It is therefore important to build a system that will sound a warning when a theft has occurred to enable quick reaction and possible recovery. This system will help in this regard by alerting supervisors of luggage handlers whenever an incident of theft has occurred.
The project has been carried out through lab tests and simulations, research by use of text books and other online sources.
The tests have confirmed the possibility of the objective, the results from lab test are consistent with the theoretical analysis and principles set out for such circuits. There may be however variation of results depending on the location of the tests and accuracy of instruments used but the results here have confirmed firmly that the idea is implementable.
While this project is merely a foundation in search for a more refined system, it points to the direction of such refined system. With a little more improvement, the system may be improved to send notifications as to when and where the theft took place. Additional systems like cameras can be made available in bags containing highly valuable contents, which could further make the system a complete solution to theft at airports and other transit corridors around the world.