The Impact of the #MeToo Phenomenon on Working Conditions for Women in Finland : Can Social Media Pressure Bring Change in Gender Politics? 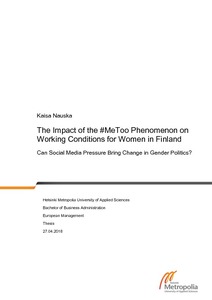 Sexual harassment is a large scale issue that originates from an unequal status of women in societies and the harassment is often faced at work. Therefore, this thesis reviews literature of gender equality and feminist theories, social media and the #MeToo movement internationally and in Scandinavia but reflecting and focusing in Finland.

Finland has been statistically one of the leading countries in gender equality and has been pioneering in advancing women’s status in the society, and the country is often praised for the living conditions of females. Despite the statistics, Finland cannot be stated to be an equal country, as there is a major issue of violence against women that results from an unprivileged status of females.

The #MeToo woke the Finnish society to address these issues of sexual harassment and domestic violence. Unlike in Sweden and Norway, major changes have not been implemented in Finland, but the movie industry has gone through changes and a Finnish MP is currently facing a court case of sexually harassing a co MP.

These conversations and the court case indicates, that change has happened in Finland as well. A change to the sexual harassment laws has been proposed, to also prohibit verbal harassment. As political decision making often follows the societal conversation, it can be stated that the #MeToo did indeed empower the women at work in Finland.