CSR in China: Is there a legacy of the iron rice bowl? : Pre-1978 social responsibilities of state-owned enterprises and their legacies in Chinese business environment 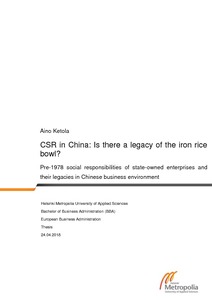 Today’s China is an outcome of structural changes that have resulted to the rapid growth of the economy. The concept of CSR has also become an important aspect in the business and an increasing amount of companies are integrating CSR activities to their business operations around the world. Although CSR in China is considered as a new topic, the country has an economic history of firms generating the social welfare: in the centrally planned economy between 1949 and 1978, state-owned enterprises were responsible for providing life-long employment and social benefits for their employees and their families, the concept known as an iron rice bowl. The requirements of the iron rice bowl were cancelled in the reforms that started in 1978, and firms shifted their focus to the financial goals, making social responsibilities a voluntary and additional part of business. This thesis aims to find out whether there is a legacy of the pre-1978 social responsibilities in the CSR perceptions and performance in today’s China. Research and findings of the study are based on three CSR theories: institutional theory, agency theory and stakeholder theory.