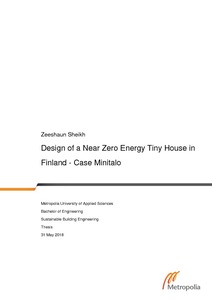 The objective of this thesis was to produce a conceptual design of a near zero energy tiny house in Finland. Although near zero energy buildings exist in Finland, tiny houses were a relatively new concept. The purpose was to combine the two concepts to achieve an overall sustainability and ecological objective.

Firstly, the concept of a near zero energy building was established to understand the design approach and technologies used. Next the concept of a tiny house was explored and real life cases were studied for both concepts.

Finally an ongoing tiny house project in Helsinki called Minitalo was utilized as a model for the design. An energy simulation was performed on three versions of the model. A benchmark model was made to find the annual space and domestic hot water heating, electricity demand and load of a small residential house in Finland. Followed by three planned models created according to the architect’s design with energy supplied from three different sources. Finally a modified model with improvisations to the building envelope of the planned model was made. The results showed the purchased and primary energy demand for each model and when it has achieved the near zero energy status. The thesis can be a design guide for future near zero energy small residential buildings.