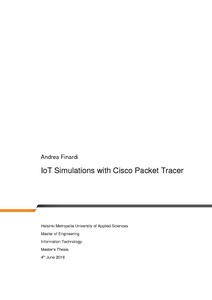 This thesis work was aiming to deliver practical IoT simulations using the Cisco Packet Tracer tool to support the Internet of Things course in Metropolia University of Applied Science.

The work was conducted as a project where requirements were first gathered, then simulations were developed and finally introduced to the students during two practical classes. Students and IoT lecturer feedbacks are also listed in the conclusions.

Four Cisco Packet Tracer IoT simulations were designed. They consisted of pre-configured IoT scenarios, simulating home and industrial applications, where a network layout and IoT devices were already set along with an IoT simulation backend intelligence and an example of microcontroller programming.
Full explanations of the simulations are included in the thesis.

The thesis work, backed up by the student feedback, was proven to be successful both from contents, methodology and support point of view. Conclusions were, however, highlighting that additional practical classes should be added in future implementations of the IoT course.

Future studies should also be conducted in order to explore new IoT simulator tools and possibility to utilize IoT real hardware technologies such as Raspberry Pi and Arduino.