Comparison of energy consumption in residential buildings: case of Eco-Viikki 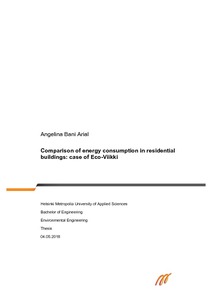 The goal of this Bachelor’s thesis was to present comparison between residential energy consumption of two building models in the city of Helsinki: Eco-Viikki buildings and control buildings in Herttoniemenranta area. Eco-Viikki is Finland’s first pilot project to realized ecological residential area, and was constructed with the highest criteria present at that time. The control area is built in the same interval time as Eco-Viikki; however, its building criteria were standard, based on regulations set by the city.
Data analysed in this thesis project was obtained through KAMUT project. A project set to view and measure the urban sustainability transformation in the city.
The results obtained from the statistical t test carried out between the electricity consumption data of Eco-Viikki and the control area Herttoniemenranta has shown that there is a significant difference in the mean electric energy consumption of the two areas. The analysed electricity data was normalized with respect to the total area showing that Eco-Viikki consumes an average of 13% more electricity than the control area. However, on other hand, Eco-Viikki consumed less energy on heating than the control area. Eco-Viikki’s monthly heating energy consumption and electric consumptions shows to be linearly correlated, regardless of their independences. In other words, increase in heating demand shows as increase in electricity demand. The statistical test result indicates that there is a statistical significant changes in the values of the heating energy consumption in years 2002-2003 and 2015-2016.
There is an observed deviation in water consumption between rental and owner-occupied houses in Eco-Viikki. Rental buildings’ consumptions are relatively higher in comparison to owner-occupied buildings' consumptions which have shown rather stable consumption within the period of 13 years.