WHAT IS THE EFFECT OF DECLINING DEMOGRAPHICS ON NATIONAL ECONOMY AND LABOR MARKET? : Comparative Analysis: Hungary & Sweden 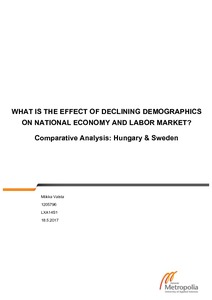 Immigration and economic growth in a contemporary scene yield intriguing data on the current state of EU’s economy and more so, on the basis of the European Union. This papers strives to gather objective data and formulate a consensus on how integration of economic immigrants arriving in Europe preemptively aid EU’s economy in the future as member state populations are rapidly aging. Methodology consists of analysis and evidence from previous studies dealing with, EU’s current state of economy, population aging as a phenomena and economic effects of migration taking place globally. The purpose is to provide comparative analysis on Hungary and Sweden’s labor markets and economic effects of aging demographics. Findings conclude that only swift economic inclusion of immigrants has the power of partly offsetting negative economic implications regarding immigration and demo- graphic aging with the help of progressive labor market policies.