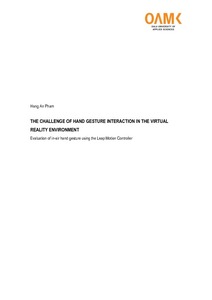 In recent years, people in the world have perceived how 3D inventions change our life. Along with the rise of the Virtual Reality technology, there are two types of interaction methods for illustrating human ‘s command in the virtual environment: via controllers and via in-air hand gesture. Using in air hand gesture is more considered because of natural manipulation and a lower cost for hardware controller. However, comparing with controller device, in-air hand gesture has many limitation of imprecise operation so it is not popular in 3D game and manufacturing industries.
By means of a user study with several levels of users, this research conducts a usability test in order to analyse the factors affect in-air hand gesture interaction. With a virtual environment with an Oculus headset and a Leap Motion controller, users were free to perform gesture actions and acknowledge the world with three sensors: sight, touch and hearing. From the data collection of real time input and user reaction, this research evaluates the human – object relationship in the 3D environment. The score of manipulation error is the valuable key to figure out the usability problems with free hand gesture interaction.
For designers, this research exposes the constraints of object in the 3D world, including the strengths and the weaknesses. The document will not derive any standard guideline or design template; instead of, it refers to the essentials to create a virtual environment in a harmony with the human world.