LEED Certification: The Difference Between Version 3 and Version 4 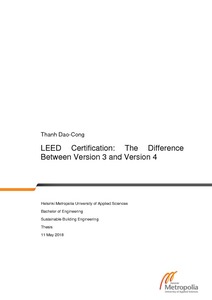 This bachelor’s thesis aimed to provide extensive comparisons between two versions of a popular green building certification LEED: LEED v3 and LEED v4. The project was implemented because of a lack of universal comparison between the two versions, in addition to the detached categories of the older version LEED v3. The purpose was to eliminate all confusion of the certification, while offering a complete package of information about the latest and sole version till date.

The study method included a literature research to combine all official documentations into one easy-to-read paper. The audience of the thesis consists of new people who would like to study LEED, experienced people used to the older version of LEED, and all people in between.

Overall, the thesis established that the current LEED v4 offers much better guidance than the older version. It also adds and updates an amount of credits that account for nearly 90 percent of the total points. However, many credits raise the standards, so it is now harder for projects to achieve similar points as they would have achieved with LEED v3. All in all, LEED v4 is the only possible version to choose for new projects at the moment.