Improving Functional Performance of The Operation Division in The Case Company. 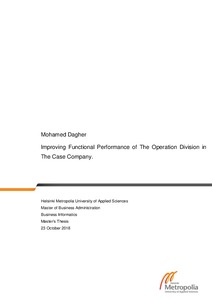 The objective of this study is to improve the internal process of the operation division in the target company. The company is a freight forwarder in Egypt with main markets in the Far East, China and Europe, and South America.

Due to the increasing growth on the business activities of the company, the workflow shows that the operation department is experiencing a lack of standard-operating procedures which are supposed to be capable of complying with the business size and increasing volumes. Furthermore, the department does not have standard policies, which has led to grey areas in processes with unclear responsibilities, ultimately resulting in huge penalties on the organization and more problems with key account customers.

The thesis has applied the case study model for the research. Both quantitative and qualitative methods were used in the study. At the current state analysis phase, the data was acquired over different techniques using interviews with employees, questionnaires to customers and case examples suggested by the management. The researcher started with process mapping, after which the observation results were divided into four main categories to draw a more defined structure. As a result, the findings of the current state analysis revealed some flaws on the process design, but other issues, however, appeared as execution errors.

By reviewing the suitable literature and exploring the best practices of two leading companies on the market, the researcher was able to provide the organization with an improved design of the internal process and standard guidelines for the operation department, the new / modified process addresses three points on the pricing stage to guarantee the smooth flow of the tasks, save time and define responsibility areas, while the suggested guidelines would maintain the integrity of the overall performance.