Effect of small scale mining on the environment in Ghana 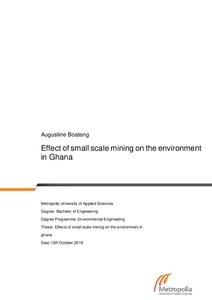 Effect of small scale mining on the environment in Ghana .pdf (705.0Kt)
Lataukset:

Illegal mining in Ghana has had a devastating effect on the environment, especially on water bodies. Even though small-scale and illegal mining have contributed to the growth of the Ghanaian economy; its damaging effects has caused more harm than good.

The thesis project was carried out by reviewing literature and media information as well as by observing some illegal mining sites in the western region and the Ashanti region where the illegal mining activities are prominent. Some miners and some community members were also interviewed.

The results of the thesis showed that both small scale and illegal mining produce huge volume of waste which are expensive to treat. Most of the mine waste are discharged into water bodies without any treatment. This has impacted the water quality of the various mining communities and the environment. It has also destroyed forest reserves which used to harbour endangered species. Farmlands and the livelihood of the inhabitants of these communities have also been destroyed.

Some suggestions have been made to curb the activities of small scale and illegal mining and its impacts on water bodies and the environment.