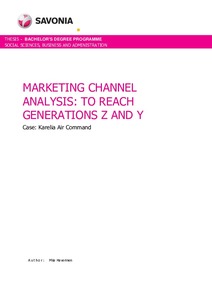 Karelia Air Command, an operational unit of the Air Force, is responsible for promoting the Air Force’s special courses of conscription and the Defense Forces as an employer to young people in Eastern Finland. As annually organized public events are the core method to complete promotional activities regarding recruitment and military service locally, it was necessary to learn if currently utilized media channels allow the organization to attract the target population belonging to generations Z and Y. The intention to conduct such a study increased, when the organization noticed that the events organized in the recent years had attracted interest mainly among older population. In addition to a marketing channel analysis, the client organization’s objective was to investigate, how Facebook paid reach affects the youth’s reach and the site’s activities compared to the organic Facebook reach. The fact that the power of Facebook’s organic reach and the site’s popularity among young people has declined over the last few years provided an interesting starting point for the research.

The study was quantitative and conducted with questionnaires at two events called Sotilasilmailusta ammatti and Puolustusvoimat 100 Kesäkiertue; the latter involved a Facebook event campaign and the first one relied on organic channel reach. The questionnaire results provided an overview of the marketing channels through which event visitors had become persuaded to attend the events. In addition to Facebook data, the survey results provided insight into the power of the Facebook event campaign and the difference between organic and paid channel reach. Also, gathered secondary data of social media trends, organic reach statistics and social media behavior of young people supported the research results and assisted to make recommendations of the marketing channel choices in the client organization in future.

According to the survey, the most relevant media channels in event marketing are the newspaper Savon Sanomat, Facebook (paid reach) and the Air Force’s official website. Billboards and the local newspapers Kaupunkilehti and Uutis-Jousi have no power in attracting people. However, due the narrow sample of young people in the survey, it is unresolved whether there are other marketing channels that allow to reach young population especially. However, the Facebook event campaign affected significantly customer reach compared to the channel’s organic reach. Also, the campaign impacted significantly on the overall visibility of Air Force’s Facebook site. The Air Force should consider utilizing social media more widely in future to attract young people more effectively.

The implementation of the research was agreed with the client organization and the research permit was received from the Defense Forces before the study process. The main connections between theory and results were analyzed thoroughly and outcomes were presented to the organization. The results provide guidelines for planning of future event marketing and encourage the Air Force to take advantage of social media channels more diversely.