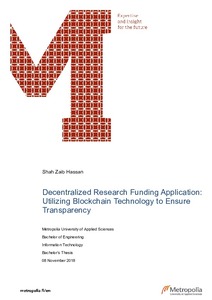 The purpose of this thesis was to investigate and study the various issues faced by educational and technological researchers while raising the funds for their respective projects and the issues faced by the fund’s providers. Multiple existing traditional fundraising platforms were identified, and their advantages and disadvantages were studied to check if it was suitable for educational and technological researchers to carry on their funding campaign using the existing platforms. Finally, the goal was to develop a decentralized research funding application which would replace the existing traditional methods of raising funds by providing the researchers the ability to create a fundraising campaign on Ethereum blockchain while ensuring the transparent and auditable usage of the funds provided for the development of the project by the stakeholders.

The research funding application was developed and deployed to Ethereum blockchain. During the development process, the technologies used were Solidity, HTML, CSS, Javascript and React. The requirements for the Minimum Viable Product of the research funding application were finalized and the project was implemented by following the Waterfall software development model.

As a result, the requirements set for the research funding application were accomplished and the application was deployed to the blockchain and can be accessed by the general public. Furthermore, additional features such as the ability to create and manage multiple funding campaigns by a single entity were also developed successfully.