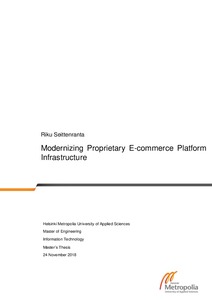 This study was made for a Finnish company that develops a proprietary e-commerce platform. The need for the study came from the realization, that the infrastructure design that has been used till now might not be sufficient in the future, as the number of environments and the amount of traffic they receive increases. The current infrastructure had served the company well for years, but the design eventually turned out not to be as scalable as desired and didn’t provide the level of availability that was excepted from today’s systems.