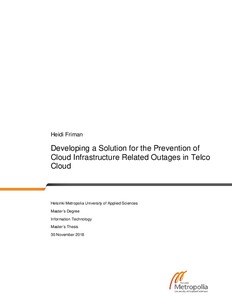 This Master’s thesis is about data analysis of fault report data to come up with a solution for preventing outages in telecommunications cloud products. The business problem that this thesis attempts to solve is how to detect and prevent network outages before they happen instead of correcting the faults after they have happened. It is about proactive care for the customer, but also about cost savings for the telecommunications vendors. The earlier a fault is detected, the more cost-efficient it is to solve. The scope is limited to faults from cloud infrastructure layer of cloud products. Also during the work, it was noticed that developing the whole solution would have been too big of a task in scope of this thesis and thus this thesis handles mainly the data analysis part of earlier detected faults in cloud infrastructure layer.

The work was done by first getting familiar with outages in the telecommunications cloud, second by investigating data analysis theory and methods. By using the CRISP-DM method a data mining project was done on the fault report data gotten from real telecommunications cloud products. WEKA and R were the tools used in the data mining tasks. Then the results were analysed and suggestions for future work given.

The goal of the project was to create a script that would alert the user when symptoms were detected that would signal an outage. The script would have been based on the data mining results on the fault data. The data analysis however brought into attention that the data that was investigated was not good enough and the data set large enough to provide valuable information. This forced the outcome to be re-iterated, and so the outcome was changed from a script to a list of improvement suggestions for the fault reporting tool.

Although the outcome was changed, the study provided valuable information, since it revealed that the data is not very suitable for data mining. The improvements suggested to the tool will make the data much more usable in the future. That is also the intent of the company. The development of the whole solution for outage prevention remains then a work to be done in the future.