PCB Development for an IoT System 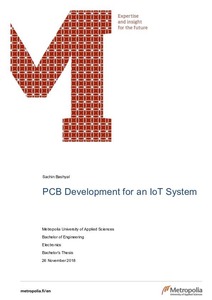 The main objective for the project was to develop PCB for a prototype of the IoT system of an old home light and to study the three free design tools that can be used for this project. The first part of the project was to study free PCB design tools available on the Internet and to select the best one among them for this project, which was initially carried out. Second and the main objective was to design and manufacture the professional PCB layout according to the given requirements and information. This project aims to develop a part of the smart home project.

The design was carried in two phases, namely schematic design and layout design. All the components required for the projects were custom created even some of them were available in the software library. The main idea behind not using the available parts from the library was to explain and understand the detailed process of PCB development task. The designed PCB will act as the IoT system prototype after feeding the codes, which were not the part of the project. The total system is designed in such way that the old light system of a house will turn to IoT so that it can be controlled by a user over Internet network being able to customize the light colors, brightness and also able to react according to the surrounding room temperature. The sole purpose of this project was to develop a hardware PCB system required for this project. The project was carried out using the tool called KiCad among two other tools, namely: DesignSpark and ExpressPCB. The design is ready for milling and testing.

The result of the project is to manufacture a functioning PCB. The design was carried out using the schematic design and layout design which will be eventually used to print out the board and place the require components on them and finally feeding the codes in order to function as required functioning IoT system.