Transitioning from server-side to client-side rendering of the web-based user interface: a performance perspective 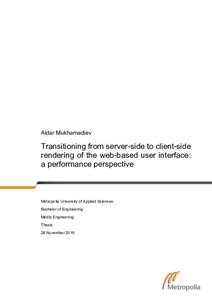 The goal of the thesis is to implement a single page application using React and Redux as a replacement for the case company’s existing solution of server-side rendered Ruby on Rails interface. Consequently, new implementation is compared to the old one from the perspective of performance only. Caused impact on both client and the server, although significantly restricted, is considered.

The investigation is limited to the desktop browsers only such as Google Chrome, Mozilla Firefox and Apple Safari, among which the former is selected as a major reference for the results and the following discussion.