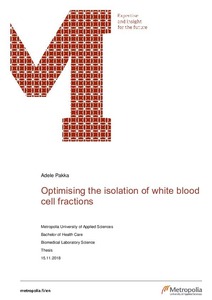 Inflammatory bowel diseases such as Crohn’s disease and Ulcerative colitis are common in the Western world. These diseases and their treatment are therefore also one of the interests of immunobiological research. Peripheral blood mononuclear cells (PBMCs) offer a tool to investigate these diseases.

Peripheral blood mononuclear cells have uniform, round nucleus. This group is formed by mainly lymphocytes and monocytes, which can be isolated from EDTA whole blood samples by using suitable gradient medium and density centrifugation.

The aim was to observe how the pre-analytical factors such as storage temperature and time effect on PBMC viability. This was done by counting viable cells at different time points and by preserving them in three different temperatures. Viability was detected by using trypan blue dye in two automated cell counters and Bürker’s chamber. The results of automated cell counters were compared with the manual counting results.

Based on the results received room temperature seems to be the best option to store the whole blood samples and that the PBMC viability doesn’t drastically drop overnight. However, due to the difficulties during the experiments made, the results of this thesis aren’t reliable. There was also a notable variation in the cell counting results, which made the result comparison difficult.