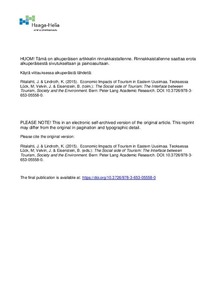 The province of Eastern Uusimaa is a popular tourism destination about 50 km east of Helsinki, the capital of Finland. Its main attraction is the medieval town of Porvoo with its old town centre and a grey stone ca-thedral from the 15th century. Other attractions include the small and idyllic town of Loviisa, the surrounding archipelago and vibrant rural communities.

This study on economic impacts of tourism in the province of Eastern Uusimaa was conducted in 2009 and used the Nordic model to measure the income from tourism in the region. The Nordic model measures both tourism expenditure and revenues. In the case of Eastern Uusimaa, the former was estimated from the results of structured visitor interviews and surveys among local residents and second home owners. The tour-ism revenue study included an Internet-based survey of service providers directly and indirectly involved in tourism, followed by statistical analysis.

According to the study, the province of Eastern Uusimaa received over 1. 7 million tourists in 2009. The biggest visitor group were day-trippers, followed by visitors staying with friends and relatives (VFR). The direct tourism revenue applying the Nordic model without value added tax (VAT) was 163 million euros and the total (direct + indirect) revenue (excluding VAT) amounted to 220 million euros. The turnover derived from tourism in the region makes the industry the third largest following the chemical and food industries. The number of jobs created by tourism in 2009 was over 1400.