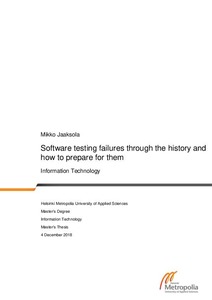 Since the day when first software development projects started there has been both successful and unsuccessful project outcomes. From the 50´s to today, IT projects has become more and more complex and project timetables more and more stricter. This has introduced new challenges to software testing. When the testing is not at the required level, the consequences may be catastrophic.

This study reveals some of the biggest software failures in the history. These cases were picked from different centuries, starting from 50´s. Each case stands as an example of how software testing was not at required level. The idea was to pinpoint the main reasons why these projects have failed and to find the solutions how the failure could have been avoided. This study focused to solve how the software testing and software errors are studied and documented. How much the software errors may cost if they are not noticed during the software project and these errors are found out later after the project has gone online. Also, how much software bugs cost to solve during a project was taken into investigation.

Main purpose of this study was to point out the importance of software testing and how much money may be lost in badly planned and failed IT/IS projects. The original scope was to focus only in software testing and how that has been documented. Based on that idea a testing framework was created that could improve software testing. After a short description about how failed testing cases were documented the scope moved to focus on how much losses were badly tested IT/IS projects causing. Keeping the original scope in mind some testing related main roles, testing processes and tools are presented.

The results of the study show that failed software projects picked to this thesis caused over 474 milliard euros losses. This included 57 projects from 1962 to year 2018. Project cancellation percent in these cases was 29,8%. Study also shows that when talking about software testing and project planning, the same issues seems to be on the table today that were already noticed 50 years ago.