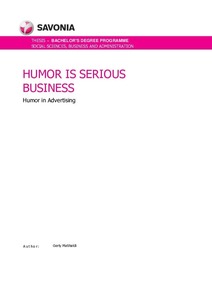 Humor in advertising is one way for companies to create attention around their brands or products. The objective of the thesis was examine the power of humorous advertisement to a consumer´s memory recall, to test differences in humor style preferences among different age groups and to examine the impact of factual contents compared to other contents in humorous video advertisements on a consumer`s purchasing behavior.