A Data Mining Approach to Compare Java with Kotlin 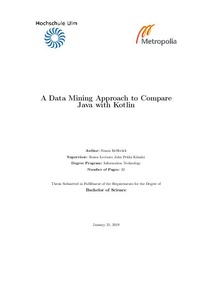 In early 2018, Google announced Kotlin to be one of the official languages for developing Android applications (next to Java). Moreover, several studies reveal that Kotlin is about to make its way to an important language in the developer community. Developers praise the conciseness, short syntax and null pointer safety. No question, a competition has started, but can Kotlin replace Java in the long run? Several factors (combined) will determine if a developer decides learning and/or using Kotlin over Java. Of course, it is also a question of investment. Furthermore, one of the major questions is: Does the short syntax and conciseness of Kotlin causes less occurrences of bad practices? In order to shed light on this question, an experiment was conducted. Java and Kotlin repositories were downloaded from GitHub, bad practices in the respective projects were analysed, counted, summed up and eventually saved in CSV files. After that, several well established statistical methods were applied to the data to get meaningful results. The main conclusion is: A substantial difference in the occurrence of bad practices can not be confirmed.