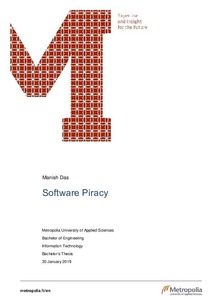 Software piracy is a subject that has challenged the software market and its entities for a very long time. Every year billions of revenues are invested to develop various software but also billions of revenues are lost due to the illegal and unauthorized use of that software. The Software Alliance (BSA) has stated that, the unlicensed software use accounts for 37% globally in a recent study. This was only 2% drop from 2016. The aim of this study is to have comprehensive understanding of software piracy, its effect on global software market, methods of piracy, security perspective and measures that can contribute to drop the piracy rate. This thesis is a brief excursion to the issues of software piracy. It provides an overview to the types of piracy, effects and possible measures that can be implemented to reduce the piracy rate. The thesis also provides an insight to the studies performed by different organizations that have been playing a vital role on decrement to software theft globally and comparison between the past and present scenarios piracy.


The study has incorporated a research to get the view on software piracy from students and some professionals. An online survey was conducted where total of 40 respondents took part. A questionnaire was created using Google Forms and was circulated among the participants via email and Facebook messages. The result of the survey illustrated that majority of participants thought the high software prices and easy accessibility of illegitimate copies of software on internet was a major cause of software piracy. It also showed that majority of the respondents were aware about software piracy and risks and effects involved with it but continued to commit it because of the lack of strong copyright law enforcement.


The thesis does not provide any concrete option to eradicate the issue but makes an attempt to aware the reader about unauthorized ownership and distribution of software. Besides, it is an interesting topic to learn and discuss about.