Women Working in Finland: Experiences of Discrimination in the Workplace and in Recruitment 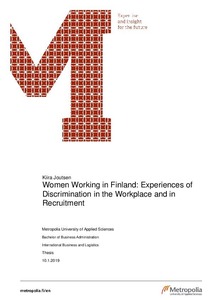 The theory focuses on the Finnish legislation regarding discrimination, how to prevent, identify and resolve discrimination, and how previous law cases and the history of women’s work in Finland affect today’s society. Discrimination is defined as treating someone unfairly compared to how some other person would have been treated in a similar situation. Discrimination is forbidden in Finland in the following laws: the constitutional law, the Non-Discrimination Act, the Employment Contracts Act and the Act of Equality Between Men and Women.