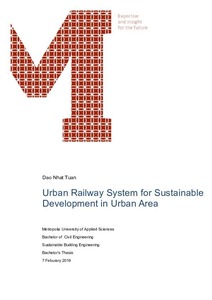 The aim of this thesis was to study an urban railway system for sustainable development of a metropolitan area. The thesis studied a basic type of municipal railway and its implementation by, first, studying two well-developed urban railway systems, and second, applying an observation to an area struggling with insustainable, insufficient public transportation.

The two developed areas studied were Helsinki and Singapore, both with successful public transport systems that have brought sustainability to the community. The thesis studied how the system were built and run, collecting information about the technical solutions and passenger services.

The thesis applied the data learned from the two developed systems to a plan drafted for an urban railway system for Cebu island in the Philippines. An implementation plan, a plan for running and future expansion of the system, and an analysis of how the system would contribute to the development of the area were analyzed. It was established that an urban railway system would improve the living quality of the residents there and help Cebu island, a hot point of tourism, attract more tourists.