Specific Absorption Rate Testing for a Mobile Phone in Europe 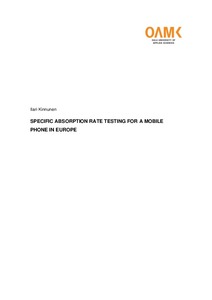 The topic for this thesis was commissioned by Verkotan Oy, a company working in the wireless industry providing testing and consulting services. The main objective was to plan and conduct accredited SAR testing for a mobile phone to be sold in Europe.

The work included clarifying the new regulations for LTE RF conducted power measurements and conducting them for all supported wireless technologies by the mobile phone, planning and conducting SAR testing, and writing test report.

The objectives given for this thesis were accomplished. The new regulations for LTE SAR testing were clarified and conducted according to IEC PAS 63083:2017. RF conducted power measurements were done for LTE, GSM/GPRS, WCDMA and WLAN technologies. Test plan was created after the RF conducted power measurements and SAR testing for the mobile phone was conducted according to it. Test report was written from the testing including all necessary information required to repeat the measurements. Any information regarding the mobile phone is not shown in this thesis because of non-disclosure agreement.