Oil spills and their impact on the Niger Delta 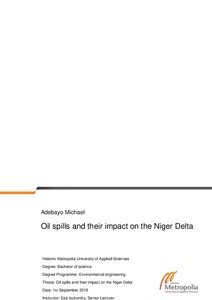 Oil spill is one of the problems associated with any oil producing country in the world. Nigeria is currently one of the world's largest oil producing nations; it is currently the sixth (6th) largest in the world and the first (1st) largest in Africa. Thus, the nation generates most of its revenue from oil production and exploration. Although there are about 5 states with oil deposits (reserves) in the nation, for now, oil exploitation is limited to the Niger Delta region. Oil spill in this region is caused by two (2) main factors which include Vandalism (for Oil theft otherwise known as illegal bunkering) and Oil pipeline leakages.

Oil theft through vandalism is the primary source of concern for the federal government of Nigeria because heavy loss of revenue is recorded yearly due to the unrepentant activities by inhabitants of the region. Local refineries are built for processing the raw crude from the oil theft. Leaking pipelines caused by corrosion and aging of the pipes is also a cause of oil spill in the region. Most of the pipelines are due for change as most of them have corroded, causing leaks of oil in some parts of the region.

Oil spill in the region has a devastating effect on the environment, health, economy and the general standard of living of the humans in the region. Oil spill has become a major cause of concern to the inhabitants as they feel neglected by the government amidst their misery. There is a constant outcry for help regarding the environment from the people of Niger Delta to the government. This has made indigenes believe they are fighting for their right as they lack access to basic social amenities such as good water, food and health care in comparison to other urban places despite being the bed-rock on which the nation's revenue is built. This has led to violence, kidnapping and high crime rate in the region.

Several military groups have been formed in a quest for claiming their perceived right from the government. The health of every individual living in the region is at risk due to failed government policies regarding gas flaring and oil spill cleaning. Other health-associated issues are also facing humans in the region. Corrupt practices among the government in power such as illegal owning of oil wells, selling of oil wells to government top officials and issues regarding dubious awarding of contract to foreign investors after receiving bribes. The aim of this thesis was to elucidate the impact of oil spill in the region; the nation's economy and the future prospects may offer a solution to both parties so that peace can be achieved between the government and the people of Niger Delta.