Exploring Perceptions on Gender in Early Years Among Kindergarten Teachers 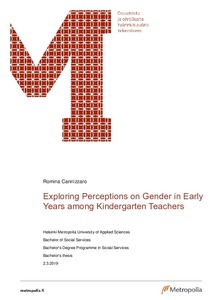 The objective of this Bachelor’s thesis was to explore the perceptions that kindergarten teachers hold around the topic of gender in early childhood. Gender development begins in the early years of the child and the kindergarten is a highly influential setting where this process takes place. In Finland, the early childhood education regulations demand staff working on this field to be gender sensitive.

As for methods, data collection and data analysis were performed qualitatively. Data collection was done using interview. As for data analysis, thematic analysis was conducted using a combination of deductive and inductive approaches. Participants (N=5) were five kindergarten teachers working in the municipalities of Helsinki and Espoo (Finland).

The results showed that gender was defined in both essentialist and non-essentialist ways. In relation to gender development, social constructionist ways of understanding this phenomenon prevailed. Participants’ responses also reported differences in the ways gender in the child is approached by different kindergarten members of staff. Furthermore, participants claimed providing non-differential treatment to genders. Moreover, impacts that gender development may have on the child’s life later on were acknowledged. Results also showed that most interviewees perceived that their academic background in early childhood education did not provide them with enough qualification on the topic of gender. Finally, interest and initiative in relation to continuing learning seems to exist among respondents. This thesis is a qualitative study and therefore these findings are not universal.

The results lead to the conclusion that the topic of gender in the early years is perceived among participants, at times, in biological terms and, at times, as a social construct. Such situation seems to indicate the existence of different starting points for each professional when it comes to addressing gender-related issues in the child. Training on this topic for early childhood education students and professionals could be further developed.