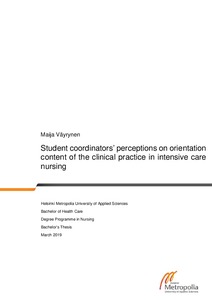 Väyrynen, Maija
All rights reserved. This publication is copyrighted. You may download, display and print it for Your own personal use. Commercial use is prohibited.
Näytä kaikki kuvailutiedot
Julkaisun pysyvä osoite on
http://urn.fi/URN:NBN:fi:amk-201904094699

The purpose of this thesis was to describe student coordinator’s perceptions on orientation content in three different hospitals, four different Intensive Care Units (ICUs) in the Hospital District of Helsinki and Uusimaa (HUS). The nursing student’s orientation during his/her clinical practice includes introducing students to the ward’s policies, vision, expectations and procedures. It is a necessary process that is crucial to the competent care and safety of patients.

Thesis’ data collection was carried out by doing a theme interview in autumn 2017. Every interview lasted for about an hour each. The interviewed personnel were the wards’ student coordinators, altogether 7 participants. The interviewees participated to the interview voluntarily and could have withdrawn if they had wished to do so in every phase of the process.

Since the data collection method was a theme interview, the student coordinators were represented with only one phrase; to describe their perceptions on the orientation content in their ward. By using this method, they could freely tell their own opinions and views on the matter without ready-made questions or interviewer’s comments leading them on.

The data was then transcribed and analysed by using an inductive content analysis. In the abstraction phase of the analysis, four different main categories were formed; unit- level and organizational-level orientation, student’s responsibilities and obligations, orientation to the clinical work and security orientation. Under these categories fell all those concepts that were formed from direct quotes, and they were grouped so that the four main categories could be formed.

The obtained results from this thesis can be used for further research purposes and when developing nursing students’ orientation during clinical practice. Further research is definitely needed on the area, and there’s a need for making the policies and practices even more coherent in the HUS area than they already are. A comprehensive, good quality orientation during a nursing student’s practice is crucial for a successful clinical practice.